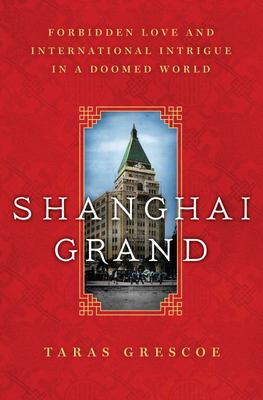 Taras Grescoe spins the true story of a British aristocrat, an American flapper, and a Chinese poet who found themselves trapped in an unlikely love triangle amid the decadence of Jazz Age Shanghai.

On the eve of WWII, the foreign-controlled port of Shanghai was the rendezvous for the twentieth century's most outlandish adventurers, all under the watchful eye of the fabulously wealthy Sir Victor Sassoon.

Emily "Mickey" Hahn was a legendary New Yorker journalist whose vivid writing played a crucial role in opening Western eyes to the realities of life in China.

At the height of the Depression, Hahn arrives in Shanghai after a disappointing affair with an alcoholic Hollywood screenwriter, convinced she would never love again. After checking in to Sassoon's glamorous Cathay Hotel, Hahn is absorbed into the social swirl of the expats drawn to pre-war China, among them Ernest Hemingway, Martha Gellhorn, Harold Acton, and a colorful gangster named Morris "Two-Gun" Cohen. But when she meets Zau Sinmay, a Chinese poet from an illustrious family, she discovers the real Shanghai through his eyes: the city of rich colonials, triple agents, opium smokers, displaced Chinese peasants, and increasingly desperate White Russian and Jewish refugees--a place her innate curiosity will lead her to explore firsthand. Danger lurks on the horizon, though, as the brutal Japanese occupation destroys the seductive world of pre-war Shanghai, paving the way for Mao Tse-tung's Communists rise to power.